In 2009, scientists who had been studying the diet of upper Paleolithic people in the Dzudzuana Cave in Georgia reported a significant and unexpected find. Tiny flax fibers were discovered in several spots in the cave, and they showed evidence of having been manipulated. Some were spun, some cut, others knotted, and many had been dyed. There were flax fibers colored black, gray, turquoise, and pink.  And they were at least 30,000 years old.  Although no complete textiles survived, the presence of these tiny fibers represents a huge discovery about the technology of ancient people.

When I heard about this archaeological find in Eurasia, I was ecstatic. Having worked as a fiber artist for most of my life, and having focused on Dark Ages Europe for my History degree, I would have been nearly as excited about any textile find from before written records. But 30,000 years old! That is phenomenal!  Let me try to explain to you why this is so exciting, not from a scientist’s point of view, but from a fiber artist’s vantage.  I’ll start by describing that straw-into-gold treasure, the flax plant.

This lovely blue-flowered plant waves in the wind on tall stems, blooming in late spring or early summer.  It grows very well in cooler climates and is a native wildflower over much of Europe and North America.  To process it into fiber, the stems are gathered after the precious seeds have been collected.

The seeds are the source of flax seeds or “linseed,” which is a valuable food source, rich in Omega-3 fatty acids and with a high oil content. The oil can be pressed from the seeds and boiled to reduce and thicken it, resulting in the product we know as linseed oil. This oil has been used for centuries as a finish for wood. Rubbed in and polished, wood gleams golden with health from this oil and becomes waterproof after the oil has dried.  The original “linoleum” was a mixture of ground cork and linseed oil, pressed and rolled out to form a durable floor covering.  After drying, it was flexible and durable, as well as beautiful.  It is a reasonable assumption that, if early people were using flax for fiber, they also treasured the versatile seed.  The seeds are an obvious gift from this delicate plant, whereas the spinnable fiber is not obvious at all.

After the stems are gathered, they are laid out in shallow water or dew-soaked grass and left to rot for a period of time up to several weeks. The proper term for this process is “retting,” but let’s be honest here: the stems are rotting.  The process can be smelly, a little slimy, and painfully long. If conditions are just right, the breaking down of the pectins that bind the fibers together only takes a few weeks. It can be hurried by using lye, but that can result in very short, dry, broken fibers more suitable for papermaking than for spinning.

The now-softened stems are dried for a few more weeks.  These stems look very much like straw and probably gave rise to the Rumplestiltskin story of spinning straw into gold. Healthy, non-bleached linen thread shines with a golden hue, and there is no doubting its value to anyone who doesn’t want to wear wool next to their skin. 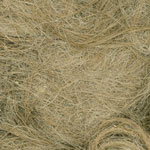 The now dried stems are now pounded until the individual fibers separate from each other. This process is referred to as “breaking,” and was traditionally done with a tool known as a “flax break.”  Sometimes a stick or a mallet was used instead of the flax break, which looks a little like a sawhorse with a hinged top meant to drop down forcefully on the dried stems.  Whichever tool was used, the stems were pounded until they began to look fuzzy and moss-like. At this point, there is light at the end of the tunnel, where you can finally see the potential for this to become something soft enough to spin.

The next step in this elaborate process is “scutching,” or scraping. The fibers are breaking apart, but bits of barky outer stem are still stuck to the long, hair-like inner fibers.  Scutching scrapes these off but also begins to break off any fibers which are dried or weak. These shorter, tangled fibers are known as “tow.” When little blonde children are referred to as “tow heads,” it isn’t just about the light color of their hair, but also describes its tendency to tangle. 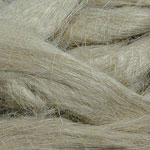 The scraped fibers are now combed to finish separating the last of the tangled, short tow from the long, elegant flax fibers. The bundle left, and ready to spin, is called a “strick.” Once spinning wheels were used, there was another step called “dressing the distaff,” where the stricks were bound to a pole connected to or near the spinning wheel and made ready for drawing out neatly to spin into a fine thread.  Thirty thousand years ago, they were probably twisted on someone’s thigh.

Since some of the flax fibers in the Dzudzuana cave were twisted, we can assume that the people then had discovered that, by twisting fibers together while drawing them out so the ends tapered, a strong and long thread could be made. The only other way to achieve a useful binding cord of any decent length would have been to cut strips of hide. Cutting with a stone knife would have been quite the ordeal.

So, you can see that spun flax fibers involved a lengthy, complicated, multi-stepped process which was unlikely to be just a happy accident.  A lot of time had gone into experimenting with the processing of those straw-like stems to turn them into gold. 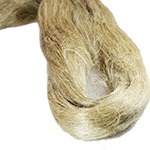 The fibers in Georgia were colored black, grey, pink, and turquoise.  To achieve a color-fast dye that would hold color for 30,000 years was as much a multi-stepped process as spinning flax. Unless there was a local Paleolithic drug store where they could drop by and pick up a packet of dye, there are only a few likely ways to achieve those colors. Let’s look at the simplest of those possibilities.  To get natural dyes to “bite,” or permeate into the fibers, some form of metal salt is required to open up the fibers and make the dye permanent.  Anyone who has lived with hard water understands that a lot of minerals can be dissolved into water without any added human effort. 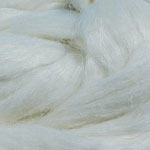 We can probably assume that there was iron available, either already dissolved in the water, or available in the form of rust or iron ore. Iron is great at turning fibers black. Adding a little iron to a colored dye bath can “sadden” or gray out the color instantly. The original khaki color common in soldiers’ uniforms came from otherwise vibrant greens or golds from local plants, cooked in an iron pot to set the dye.   The well known European Bog People are preserved as black corpses, wearing black clothing, because the high iron content in the peat bogs where they laid for centuries both preserved them and dyed them black.  So, the simple availability of iron can account for both the black and the gray dyed threads.

The simplest way to get turquoise dye for a plant is with soluble copper. Copper sulfate dissolved in water makes a blue color. Soaking any form of copper, including ore, in an ammonia solution will create copper sulfate in a turquoise blue solution. The alkalinity of this solution is very hard on protein fibers like wool, but a cellulose  (plant) fiber like flax won’t be damaged by the ammonia. A soak overnight in a strong copper sulfate bath will color a fiber a lovely shade of blue-green. Depending on the other minerals in the local water, the shade may be more green and less blue, or vice versa.

Oddly enough, the pink color is probably the most complicated color to achieve on flax. At least any pink dye which would last for eons would be hard to get. Berries, beets, and some barks can readily stain fibers pink, but it isn’t lightfast or durable unless there was also a mordant.  Alum would be the most likely available mordant besides iron and copper, and it would be sufficient for helping the dye be permanent. The fiber would be heated in the mordant solution, then the color would be added and the fiber kept simmering for even longer. Modern natural dyers will heat over the stovetop for about an hour for each step, mordant and then dye.

Since most modern people have absolutely no idea where the fibers in their clothing comes from, or how it gets its color, it seems even more remarkable that these ancient people did the scientific experimenting necessary to produce spun and dyed flax fibers.  Next time you pick up a linen dish towel, think of Dzudzuana and our determined ancestors who paved the way for the invention of neon polyester so many eons later.

If you are interested in archaeology and ancient textiles, I highly recommend any of these books by Elizabeth Wayland Barber: 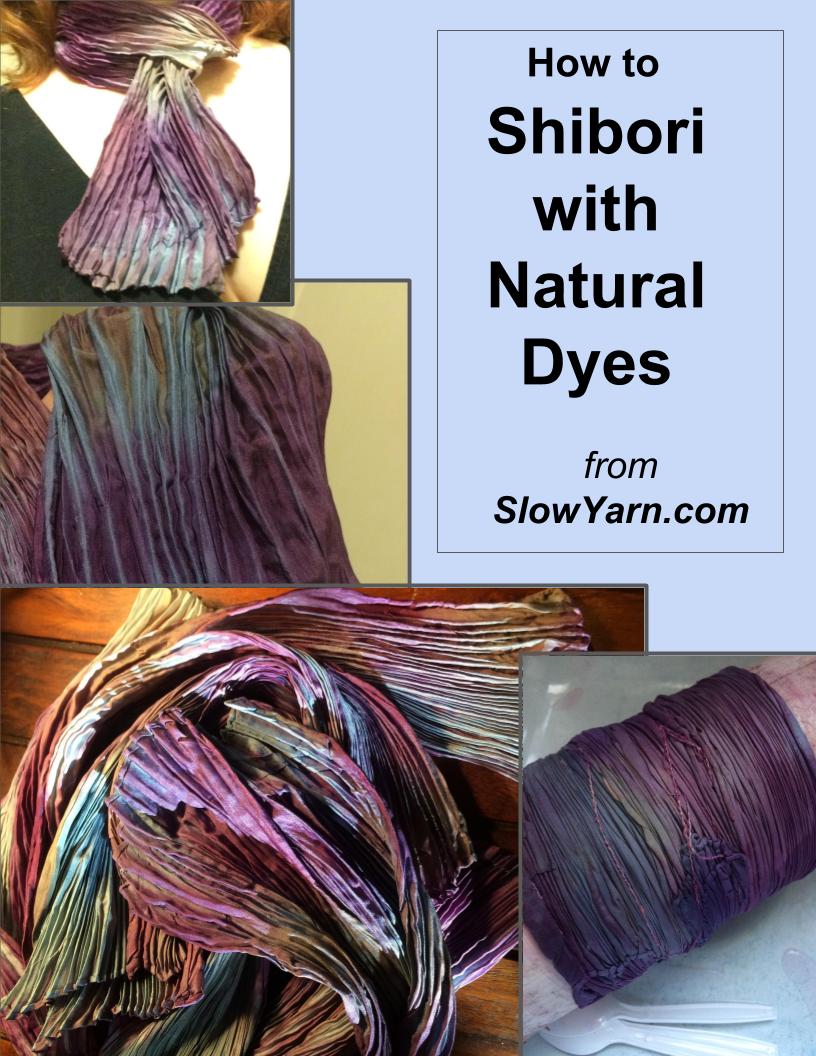 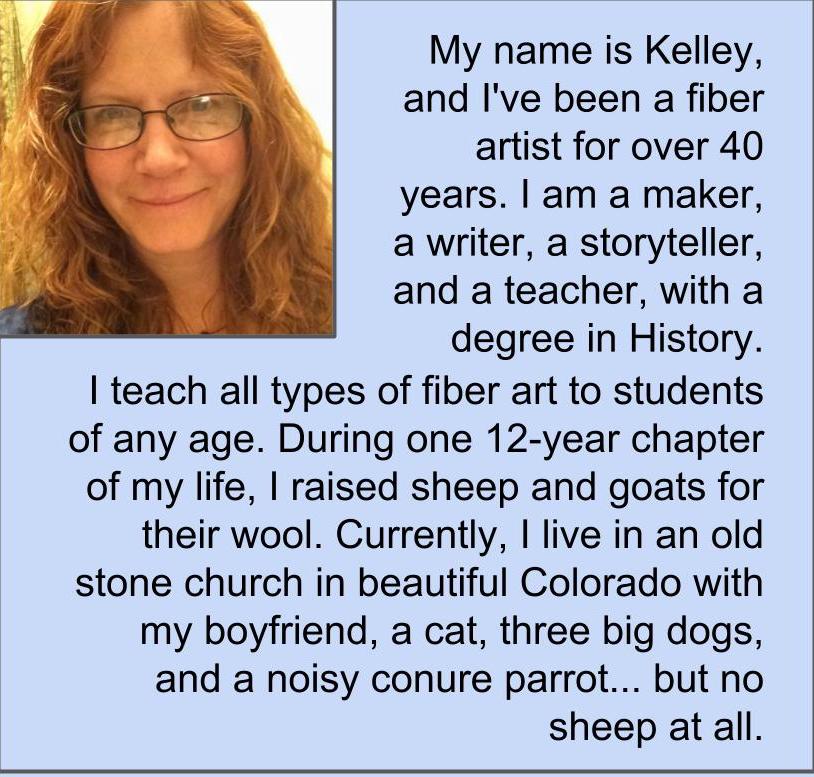